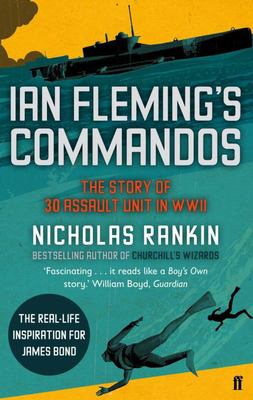 Ian Fleming's Commandos: The Story of 30 Assault Unit in WWII

In 1942, Lieutenant-Commander Ian Fleming was personal assistant to the Director of Naval Intelligence - the dynamic figure behind James Bond's fictional chief, 'M'. Here, Fleming had a brilliant idea: why not set up a unit of authorised looters, men who would go in hard with the front-line troops and steal enemy intelligence? Known as '30 Assault Unit', they took part in the major campaigns of the Second World War, landing on the Normandy beaches and helping to liberate Paris. 30AU's final amazing coup was to seize the entire archives of the German Navy - thirty tons of documents. Ian Fleming flew out in person to get the loot back to Britain, where it was combed for evidence to use in the Nuremburg trials. In this gripping and highly enjoyable book, Nicholas Rankin, author of the best-selling "Churchill's Wizards", puts 30 Assault Unit's fascinating story in a strategic and intelligence context. He also argues that Ian Fleming's Second World War service was one of the most significant periods of his life - without this, the most popular spy fiction of the twentieth century would not have been written.

"It is, first of all, chock-a-block full of wonderful stories and odd characters, and secondly awash in wonderful, arcane knowledge of the seamy and secret side of World War Two...suavely blended, like one of Bond's Martinis." --Michael Korda, The Daily Beast"A kind of cousin to Rankin's own A Genius for Deception: How Cunning Helped the British Win Two World Wars, this will appeal to all readers interested either in Ian Fleming or World War II secret operations." - Library Journal"Nicholas Rankin's fascinating book is an account of the 30AU's progress through the war. From time to time it reads like a Boy's Own story, so flamboyant are the characters and so vivid Rankin's accounts of the deadly scrapes and firefights the commandos found themselves involved in. The research is prodigious and lucid - now I finally understand how an Enigma machine works - and one gains a real sense of how these maverick units functioned, very much akin to the Long Range Desert Group

Nicholas Rankin spent twenty years broadcasting for BBC World Service where he was Chief Producer and won two UN awards. He is the author of Dead Man's Chest, Telegram from Guernica and the bestselling Churchill's Wizards, the story of British intelligence in the two World Wars.